CHAMPAIGN, Ill. — Roger Ebert’s Film Festival has had a thing for films featuring Scott Wilson, and he has come to four festivals as a guest, including the first.

This year’s “Ebertfest” will be showing yet another of the actor’s films, a post-World War II romance, “A Year of the Quiet Sun” (1984), but this time in his memory. Wilson died last year.

“Sun” is the first film announced for this year’s festival, coming April 10-13 to the ornate Virginia Theatre, a restored downtown Champaign movie palace, with related events held at other downtown or University of Illinois locations.

Wilson’s co-star, Polish actress Maja Komorowska, will be a guest with the film along with the actor’s widow, Heavenly Wilson. Both will appear onstage after the film for a celebration of the actor’s life. The entire festival is also being dedicated to his memory.

Roeper will select two of the festival’s 12 films, working with festival co-founder and host Chaz Ebert and festival director Nate Kohn. Roeper also will appear onstage after each of those films to reflect on his partnership with Roger and to moderate the guest panels.

In “A Year of the Quiet Sun,” Wilson plays an American soldier who falls in love with a Polish refugee in war-torn Europe. In a 2003 review, Roger Ebert praised Wilson’s “great performance” and called the movie “poetic in the way it visualizes the hope of the two lovers while reflecting the poignancy of their fates.” It won a best film award at the Venice Film Festival.

The festival is sponsored by the U. of I. College of Media.

All passes can be purchased through ebertfest.com, thevirginia.org or at the Virginia Theatre box office, 203 W. Park Ave., Champaign, 217-356-9063.

Tickets for individual movies will be available April 1, after the full schedule is announced.

The festival schedule is getting a revamp in 2019, when it will run four days instead of five. The April 10-13 festival will open Wednesday evening and close Saturday evening instead of Sunday afternoon, as it has in the recent past.

“The festival originally ended on Saturday night to give the audience time to travel back home or just get ready for the week ahead, but we eventually added Sunday,” said Chaz Ebert, a co-founder of the festival with Roger. “We are returning to that original schedule, but you won’t notice it because we will still have the same number of films. I promise we will have the same joy and discovery packed within those days. After all, this will be year 21 and we want to make it special.”

The festival passes cover all 12 or more screenings during the festival, held in the ornate Virginia Theatre, a restored downtown Champaign movie palace. Related talks and panel discussions may be held at the Hyatt Place hotel in downtown Champaign and at the University of Illinois at Urbana-Champaign.

In addition to celebrated films, the festival presents cinematic works overlooked by audiences, critics or distributors. It was founded by Ebert, an Urbana native, U. of I. journalism graduate and Pulitzer Prize-winning film critic for the Chicago Sun-Times who died in 2013.

Chaz Ebert, Roger’s widow, is the executive producer of the festival and its host; Nate Kohn is the festival director.

The lineup of films, guests and other events will be announced several weeks before the festival, which is sponsored by the U. of I. College of Media.

Four time Grammy Award-winner ROSANNE CASH will perform with special guest John Leventhal, live in concert at the historic Virginia Theatre, 203 West Park Avenue, Champaign, on Thursday, November 8, 2018, at 7:30 P.M. Reserved seating tickets are $39.50-$69.50 and are on sale now at the Virginia Theatre Box Office, online at thevirginia.org, or charge by phone at 217-356-9063. Presented by the Champaign Park District. The Virginia Theatre’s 2018-2019 Season Sponsors are The News-Gazette, WCIA, & WILL Illinois Public Media.

Rosanne Cash is on tour supporting her new album, She Remembers Everything, a collection of deeply moving songs that reckon with a flawed and fragile world. She Remembers Everything follows Rosanne’s triple-Grammy winning 2014 album The River & the Thread and marks a return to more personal songwriting after a trio of albums that explored her southern roots and family heritage. In the wake of the latest tsunami of survivor stories, Cash has embraced women’s narratives in this powerful material. “There is a woman’s real life, complex experiences, and layered understanding in these songs,” Rosanne says. “I could not have written them 10 years ago—not even close. Time is shorter, I have more to say.” She Remembers Everything was produced by collaborator John Leventhal and Tucker Martine (The Decemberists, My Morning Jacket, Mavis Staples, Neko Case).

One of the country’s pre-eminent singer/ songwriters, Rosanne Cash has released 15 albums of extraordinary songs that have earned 4 Grammy Awards and 11 nominations, as well as 21 top 40 hits, including 11 No. 1 singles. Cash is also an author whose four books include the best-selling memoir Composed, which The Chicago Tribune called “one of the best accounts of an American life you’ll likely ever read.” Her essays have appeared in The New York Times, Rolling Stone, The Oxford- American, The Nation, and many more print and online publications. A new book, Bird On A Blade, blending the images of acclaimed artist Dan Rizzie with strands of lyrics from a variety of Cash’s songs, has just been published by UT Press.

Ms. Cash was awarded the SAG/AFTRA Lifetime Achievement award for Sound Recordings in 2012 and received the 2014 Smithsonian Ingenuity Award in the Performing Arts. She was chosen as a Perspective Series artist at Carnegie Hall for the 2015-16 season, and curated a series of American roots music, including her own performance. She continues her association with Carnegie Hall as a Creative Partner for the 2018-19 season. She also served as 2015 Artist-in-Residence at the Country Music Hall of Fame and Museum in Nashville and was inducted into the Nashville Songwriters’ Hall of Fame that same year. Earlier this year Cash was awarded with the Spirit of Americana: Free Speech Award and received an honorary doctorate degree from the Berklee College of Music. 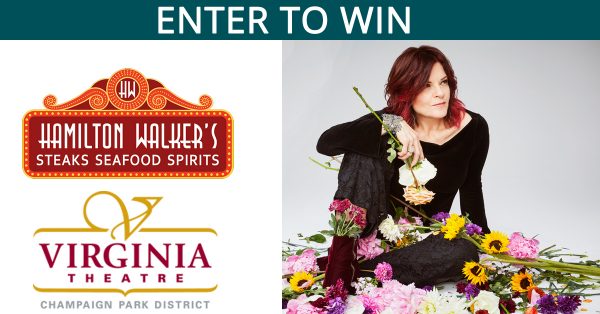 Enter to win a fabulous Dinner & Concert Package! Simply fill out the form below by Thursday, 10/25 @ 10am and be entered to win a $100 gift card to Hamilton Walker’s and a pair of tickets to see Rosanne Cash on 11/8 at Virginia Theatre!

Original founding members Walter Williams and Eddie Levert first formed The O’Jays in 1963, in Canton, Ohio, and over 50 years later, they’re still touring with the same electrifying energy, thrilling fans the world over. After being signed to a major label in 1972, The O’Jays scored their first number 1 hit, the million-selling “Backstabbers,” to be followed by a long run of legendary, chart-topping pop/R&B singles like “Love Train”, “Put Your Hands Together”, “For The Love of Money”, “I Love Music”, “Livin’ For The Weekend” and “Use Ta Be My Girl.”