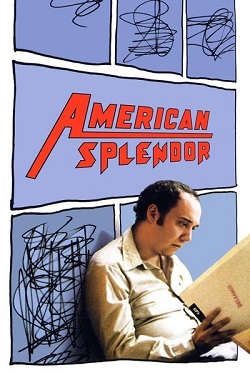 American Splendor follows Harvey Pekar, a file clerk at the local VA hospital who becomes inspired to write his own brand of comic book. Harvey makes his ‘American Splendor’ a truthful, unsentimental record of his working-class life, a warts-and-all self-portrait. First published in 1976, the comic earns Harvey cult fame throughout the 1980s.

Roger Ebert wrote: ‘The movie deals not merely with real and fictional characters, but even with levels of presentation. There are documentary scenes, fictional scenes, and then scenes illustrated and developed as comic books, with the drawings sometimes segueing into reality or back again. The filmmakers have taken the challenge of filming a comic book based on a life, and turned it into an advantage — the movie is mesmerizing in the way it lures us into the daily hopes and fears of this Cleveland family.’

‘Movies like this seem to come out of nowhere, like free-standing miracles. But American Splendor does have a source, and its source is Harvey Pekar himself — his life, and what he has made of it. The guy is the real thing.’