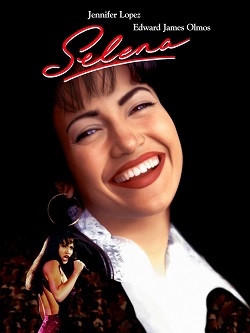 Selena tells the true story of Selena Quintanilla-Perez, a Texas-born Tejano singer who rose from cult status to superstar performing at the Astrodome. Her popularity rose astronomically, having chart-topping albums on the Latin music charts, before her murder at the age of 23.

Roger Ebert wrote, ‘Selena brings freshness and heart to the life story of a little girl from Corpus Christi, Texas, who had big dreams and was lucky enough to realize almost all of them before her life was cut short. Selena Quintanilla was poised to become the first female singer to cross over from Spanish to English markets when she was shot dead on March 31, 1995. Selena succeeds, through Lopez’s performance, in evoking the magic of a sweet and talented young woman. And, like Nava’s ‘My Family,’ it’s insightful in portraying Mexican-American culture as a rich resource with its own flavor and character. It’s ironic that the most successful modern Latina singer could once have had a talk with her dad where he sighed, ‘You like Donna Summer, I like doo-wop.’ But he also said, ‘You gotta be who you are.’ She was.’