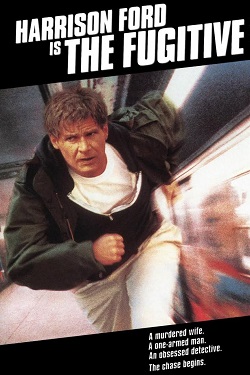 Dr. Richard Kimble, unjustly accused of murdering his wife, must find the real killer while being the target of a nationwide manhunt led by a seasoned US Marshall.

In his 4-star review, Roger Ebert called the film ‘one of the best entertainments of the year, a tense, taut and expert thriller that becomes something more than that, an allegory about an innocent man in a world prepared to crush him.’

He continued, ‘Strangely, although the film is relentlessly manipulative, it plays like real events. Nothing can really be believed in retrospect, but Davis and his actors ground all the action and dialogue in reality, so we don’t consider the artifice while it’s happening. Davis, the director, has come up through a series of superior action films. Here he transcends genre and shows an ability to marry action and artistry that deserves comparison with Hitchcock, yes, and also with David Lean and Carol Reed.’

‘Thrillers are a much-debased genre these days, depending on special effects and formula for much of their content. The Fugitive has the standards of an earlier, more classic time, when acting, character and dialogue were meant to stand on their own, and where characters continued to change and develop right up until the last frame. Here is one of the year’s best films.