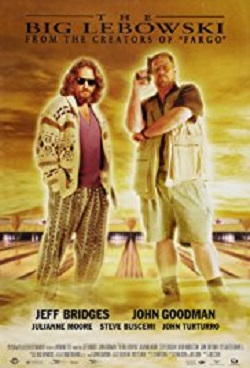 While sometimes difficult to define, The Big Lebowski’s plot can be summarized as a story about Jeff ‘The Dude’ Lebowski, an out-of-work, laidback…dude, who is mistaken for a millionaire also named Lebowski. What follows are the shenanigans that ensue when The Dude seeks restitution for his ruined rug and enlists his bowling buddies to help get it back.

Roger Ebert’s writes of the cult classic: ‘The Big Lebowski is about an attitude, not a story. It is widely known that the Dude was inspired by a real man named Jeff Dowd, a freelance publicist.’

Ebert describes The Dude’s attitude about his state of life at the end of the film: ‘Does this depress him? Is he concerned about being chronically unemployed? No. If a man has a roof over his head, fresh half-and-half for his White Russians, a little weed and his bowling buddies, what more, really, does he need?’