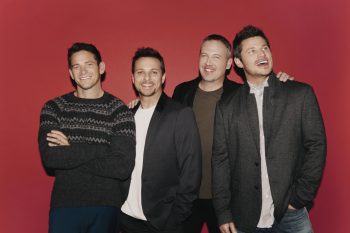 Plus, just in time for the Holidays, we’ll also throw in a free Pass to our Best Christmas Movies Ever film series – one Pass per ticket purchased! Catch It’s A Wonderful Life, Miracle on 34th Street, and more on the Virginia’s 52-foot screen, FREE!

About the show:
98 Degrees is warming up your holiday season at the Virginia Theatre in downtown Champaign on November 28! Don’t miss their live performance of Christmas classics plus hit songs like “Because of You,” and “I Do.”

In five short years (1997-2002) 98° sold a staggering 10 million records, scored a chart-topping single, “Thank God I Found You” with Mariah Carey, and collaborated with their idol, Stevie Wonder, on “True to Your Heart,” for the 1998 animated Disney film, Mulan. Their four-million-selling album, 98° and Rising, spawned the top-5 favorites “Because of You,” “I Do,” and “The Hardest Thing,” while 2000’s Revelation, which sold two million copies, peaked at number 2 on the Billboard 200 and yielded a trio of hits, “Give Me Just One Night,” “My Everything” and “The Way You Want Me To.”

The group emerged at a time when teen-oriented acts such as the Spice Girls, The Backstreet Boys and NSYNC were just hitting the top of the charts around the world. They differentiated themselves from many of the other teen bands at the time as they wrote much of their own material, which reflected their own R&B influences.

Last year, 98° released their first full-length Christmas album in 18 years, Let It Snow, to glowing reviews from both fans and critics alike.