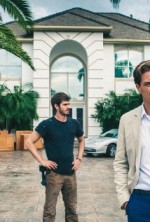 (2014) The latest feature film from director Ramin Bahrani, an Ebert favorite who has had three previous films at the festival. This one takes an uncomfortable look at economic inequality and the Great Recession housing crisis through the story of a family evicted from their home in Orlando, Florida, and the realtor who is profiting from multiple foreclosures.

Though the film deals with a social issue, it’s structured like a thriller, said film critic Brian Tallerico. And even though some eviction scenes are “gut-wrenching,” the film avoids a black-and-white portrayal, Tallerico said.

Bahrani and actor Noah Lomax, who plays a son in the evicted family, will be guests.