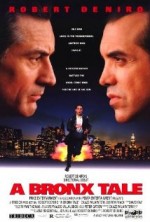 (1993) A drama set in 1968 in an Italian-American Bronx neighborhood about a teenage boy and the two men attempting to shape his life – his father, played by Robert De Niro, and a gangster named Sonny, played by Chazz Palminteri.

The screenplay was written by Palminteri and the film was directed by De Niro, in a first-time effort. The film is “filled with life and colorful characters and great lines of dialogue,” said Ebert in his 1993 review, and De Niro “finds the right notes as he moves from laughter to anger to tears.”

Palminteri and producer Jon Kilik will be guests.