A CUTC production of OKLAHOMA! 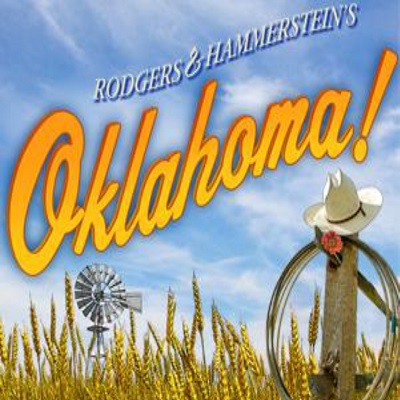 The Champaign Urbana Theatre Company is returning to the Virginia Theatre August 4 through 7 to produce and perform the award-winning Broadway musical OKLAHOMA! — with live musical accompaniment — in their first theatrical engagement at the historic downtown venue since 2009!

OKLAHOMA! is the first stage musical written by the creative team of composer Richard Rodgers and librettist Oscar Hammerstein II. Based on Lynn Riggs’ 1931 play, Green Grow the Lilacs, the original 1943 Broadway production of OKLAHOMA! was an unprecedented critical and popular success. Set in 1906 Oklahoma Territory, it tells the story of cowboy Curly McLain and his romance with farm girl Laurey Williams and features musical numbers – including “Oh, What a Beautiful Mornin”, “The Surrey with the Fringe on Top”, and “Oklahoma!” – that became standards in the Great American Songbook.

The first of Rodgers & Hammerstein’s many successful collaborations (which include Carousel, South Pacific, The King and I, and The Sound of Music), OKLAHOMA! remains one of their most innovative shows, epitomizing the “book musical” — a musical play where songs and dance numbers are fully integrated into a dramatic story. Its original production was an instant box-office smash and ran for a record-setting 2,212 performances, later enjoying award-winning revivals, national tours, and countless foreign productions. In 1955, OKLAHOMA! was adapted into an Academy Award-winning 70 mm film starring Gordon MacRae and Shirley Jones. Rodgers and Hammerstein won a special Pulitzer Prize for OKLAHOMA!, in 1944.

CUTC
The Champaign Urbana Theatre Company (CUTC) was formed in 1991 with the mission of community theatre for the community by the community. After more than twenty years and eighty shows, this vision is alive and well in the group’s commitment to provide entertainment, education, and opportunities for involvement in all aspects of the theatrical arts.

Stephen Fiol
An established stage director, performer, and educator of opera and musical theatre for 40 years, Mr. Fiol has served as Millikin University’s Director of Opera, Director of the School of Music, Dean of the College of Fine Arts, Vice President of Academic Affairs, and founding Director of the Center for International Education. In addition to directing 75 operas and musicals during his time at Millikin, Stephen Fiol has directed stage performances throughout the Midwest at universities, regional opera companies, and during five seasons at The Interlochen Center for the Arts. Since 2000, he has directed eleven productions for the UIUC Opera Program at the Krannert Center for the Performing Arts, Urbana.

The Virginia Theatre’s 2016-2017 Season Sponsors are The News-Gazette and WILL – Illinois Public Media.