An event every day that begins at 12:00 am, happening 2 times 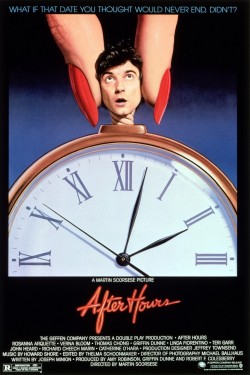 (97 min)  “After Hours” approaches the notion of pure filmmaking; it’s a nearly flawless example of — itself. It lacks, as nearly as I can determine, a lesson or message, and is content to show the hero facing a series of interlocking challenges to his safety and sanity. It is “The Perils of Pauline” told boldly and well.

Critics have called it “Kafkaesque” almost as a reflex, but that is a descriptive term, not an explanatory one. Is the film a cautionary tale about life in the city? To what purpose? New York may offer a variety of strange people awake after midnight, but they seldom find themselves intertwined in a bizarre series of coincidences, all focused on the same individual. You’re not paranoid if people really are plotting against you, but strangers do not plot against you to make you paranoid. The film has been described as dream logic, but it might as well be called screwball logic; apart from the nightmarish and bizarre nature of his experiences, what happens to Paul Hackett is like what happens to Buster Keaton: just one damned thing after another”.  – From the reconsideration in Roger Ebert’s book “Scorsese by Ebert.”

THE FILMS OF MARTIN SCORSESE