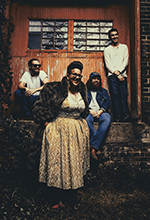 Released in 2012, the Alabama Shakes’ debut album, Boys & Girls (ATO Records), was RIAA Certified Gold and so was the first single, ‘Hold On.’ The song was voted the #1 Best Song of 2012 by Rolling Stone and was featured on the 2013 GRAMMY Nominees compilation. ‘You Ain’t Alone,’ another track from the album, can be heard now in the advertising campaign for the Oscar-nominated film Dallas Buyers Club.

The Alabama Shakes have been nominated for four GRAMMY Awards, a BRIT and an NME Award. The band was named Emerging Artist of the Year at the Americana Music Association’s Honors and Awards ceremony in 2012.