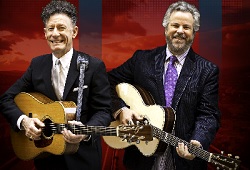 A singer, composer and actor, Lyle Lovett has broadened the definition of American music in a career that spans 14 albums over three decades. Coupled with his gift for storytelling, this Texas-based musician fuses elements of Americana, swing, jazz, folk, gospel, and blues in a convention-defying manner that breaks down barriers. Among Lovett’s many accolades are included four Grammy Awards, the Americana Music Association’s inaugural Trailblazer Award, and being named Texas State Musician. His recorded works, rich and eclectic, are some of the most beloved of any living artist working today.

Now three-decades on from his debut release and with nineteen albums to his name, Robert Earl Keen remains as inspired by his muse as ever. From his humble beginnings on the Texas folk scene, he’s blazed a trail that’s earned him living-legend status in the Americana world. He was a relative unknown at the release of his second studio album in 1989, but after the recording of ‘Whenever Kindness Fails’ on his 1993 album A Bigger Piece of Sky, the secret was out on Keen’s credentials as a songwriter’s songwriter. In 2012, he was inducted into the Texas Heritage Songwriters Hall of Fame along with his college buddy, Lyle Lovett.