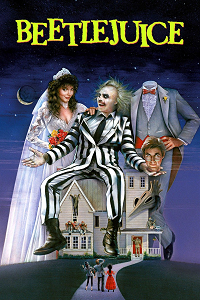 Due to a conflict with the licensing rights, we are unable to present Young Frankenstein as previously announced. We are terribly sorry for this inconvenience.  In its place, the Virginia will be substituting the 1988 film Beetlejuice.

(92 min) Beetlejuice is a 1988 American comedy fantasy film directed by Tim Burton, produced by The Geffen Film Company, and distributed by Warner Bros. The plot revolves around a recently deceased young couple (Alec Baldwin and Geena Davis) who become ghosts haunting their former home, and an obnoxious, devious ghost named Betelgeuse (pronounced “Beetlejuice”, portrayed by Michael Keaton) from the Netherworld who tries to scare away the new inhabitants (Catherine O’Hara, Jeffrey Jones, and Winona Ryder) permanently.