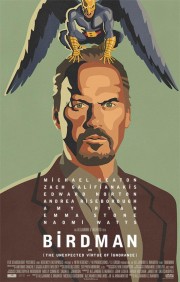 (119 min) Illustrated upon the progress of his latest Broadway play, a former popular actor’s struggle to cope with his current life as a wasted actor is shown.

THE FILMS OF ALEJANDRO G. INARRITU

Iñárritu’s singular style has earned him critical acclaim and a host of trophies, including three BAFTA Awards, three Golden Globes, three Cannes Film Festival awards, and four Oscars. We present three of his most extraordinary movies this month.