An event every day that begins at 12:00 am, repeating indefinitely 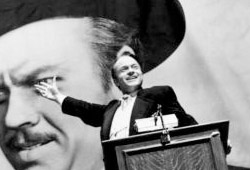 (119 min)
Orson Welles’s epic tale of a publishing tycoon’s rise and fall is entertaining, poignant, and inventive in its storytelling, earning its reputation as a landmark achievement in film. The film, budgeted at $800,000, received unanimous critical praise event at the time of its release, although ti was not a commercial success (partly due to its limited distribution and delayed release by RKO due to pressure exerted by famous meglomaniac publisher W.R. Hearst) – until it was re-released after World War II, found well-deserved (but delayed) recognition in Europe, and then played on television.