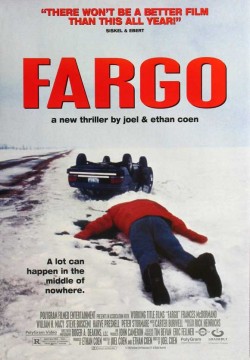 (98min) Jerry Lundegaard’s inept crime falls apart due to his and his henchmen’s bungling and the persistent police work of the quite pregnant Marge Gunderson. Fargo premiered at the 1996 Cannes Film Festival where Joel Coen won the festival’s Prix de la mise en scène (Best Director Award) and the film was nominated for the Palme d’Or.  A critical and commercial success, Fargo received seven nominations at the 69th Academy Awards, including Best Picture, and won two awards: McDormand won Best Actress and the Coens won Best Writing (Original Screenplay).