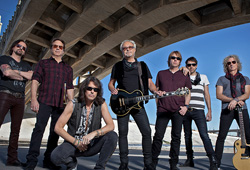 With ten multi-platinum albums and sixteen Top 30 hits, FOREIGNER is universally hailed as one of the most popular rock acts in the world with a formidable musical arsenal that continues to propel sold-out tours and album sales, now exceeding 75 million. Responsible for some of rock and roll’s most enduring anthems, including “Juke Box Hero”, “Feels Like The First Time”, “Urgent”, “Head Games”, “Hot Blooded”, “Cold As Ice”, “Dirty White Boy”, “Waiting For A Girl Like You”, and the worldwide #1 hit, “I Want To Know What Love Is”, FOREIGNER continues to rock the charts more than thirty years into their career.

Founded in 1976, FOREIGNER’S debut album produced the hits “Feels Like The First Time”, “Cold As Ice” and “Long, Long Way From Home”. The album Double Vision followed, as did a string of hits like “Urgent”, “Juke Box Hero”, and “Waiting For A Girl Like You”. Those songs helped give FOREIGNER’S next album, 4, its impressive run at #1 on the Billboard chart. At the zenith of 80’s sound, FOREIGNER’S fifth album, Agent Provocateur, gave the world the incredible #1 global hit, “I Want To Know What Love Is”. This musical milestone followed the record-breaking song “Waiting For A Girl Like You”.

An unprecedented new level of energy commenced in 2002 when Mick Jones decided to take FOREIGNER to the next level. He was joined by the astonishing Kelly Hansen on vocals, and continues as they lead the group in a re-emergence of astounding music that speaks to both long- time FOREIGNER fans and younger generations. With renewed energy and direction, FOREIGNER hit the Billboard charts again with the 2005 release of their live greatest hits album, Extended Versions. Can’t Slow Down followed in 2009, and entered the Billboard chart in the Top 30, driven by two Top 20 radio singles, “In Pieces” and “When It Comes To Love”.

In June 2013, Mick Jones was inducted into the Songwriters Hall Of Fame. A multi-talented and multi-dimensional “musician’s musician”, Jones has also written songs such as “Bad Love” with Eric Clapton and “Dreamer” with Ozzy Osbourne, and produced records for other recording artists, including Billy Joel’s Storm Front and Van Halen’s 5150. A Grammy and Golden Globe-nominated songwriter, Jones is the winner of the prestigious British Ivor Novello Songwriter Award for “The Flame Still Burns”, the soundtrack music for the film Still Crazy.

In May 2014, Atlantic Records Chairman Craig Kallman presented Jones with RIAA Gold and Platinum Digital Awards for six FOREIGNER songs. These awards signify 500,000 and 1,000,000 downloads of FOREIGNER hits. That is more individual awards than any other heritage rock band, and an illustration of FOREIGNER’S continuing resonance in the digital era.

The year continued with FOREIGNER’S headline run in The Soundtrack of Summer US amphitheater tour. The hits compilation album of the same name was released to coincide with the tour and immediately hit the Billboard Top 200 chart, peaking at #64. For most weeks during the tour, Juke Box Heroes joined The Soundtrack Of Summer in the Billboard Top 200 making FOREIGNER the only classic rock band to have such a remarkable presence in today’s chart.