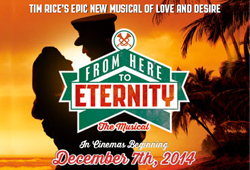 Sir Tim Rice will speak via Skype at the Virginia Theatre’s screening of From Here to Eternity: The Musical! The lyricist for “The Lion King”, “Evita”, and “Joseph and The Amazing Technicolor Dreamcoat” will join this special program in honor of National Pearl Harbor Remembrance Day, Sunday, December 7, at the Virginia Theatre in Downtown Champaign.

From Here to Eternity: The Musical (146 minutes)
Three-time Tony Award-winning and Academy Award-winning author and lyricist Sir Tim Rice will introduce, via Skype, a special screening of a filmed performance of his new stage play, From Here to Eternity: The Musical, at the historic Virginia Theatre on National Pearl Harbor Remembrance Day. Members of Urbana VFW Post #630 and Marine Corps League #1231 will be present to observe the day of remembrance and to present a color guard, and a panel discussion about the musical will immediately follow the screening. An exhibit on the military history of the time will be on display in the theatre’s eastern lobby. General Admission tickets are $10 each ($5 each for all veterans and active duty military service personnel) and may be purchased at the Virginia Theatre box office, 203 West Park Avenue, Champaign, by phone at 217-356-9063, or charge online here at thevirginia.org. Presented by the Champaign Park District, with support from Forced Perspective Entertainment, Inc.

Adapted from James Jones’ classic 1951 novel about army life set in 1941 Hawaii – at the time of the attack on Pearl Harbor – and produced and with lyrics by Tim Rice, From Here to Eternity: The Musical was filmed specifically for movie theatres over two nights at London’s famous Shaftesbury Theatre. This exclusive first look at Rice’s acclaimed new stage production was shot earlier this year, prior to the play’s Broadway debut (scheduled for 2015).

Both Mr. Rice’s introductory remarks and the talk-back will be streamed live online by Forced Perspective Entertainment (watch this space for the link!), at no cost to viewers. Panelists include Ray Elliott, past president of the James Jones Literary Society and military advisor to From Here to Eternity: The Musical; Valleri Robinson, Associate Professor of Theatre, University of Illinois at Urbana-Champaign; and Jeff Nelson, film and theatre critic. Patrons will also be invited to view a special exhibit of military artifacts set in the theatre’s eastern lobby. The exhibit is presented and curated by Bill McLane.

2014 marks the 60th anniversary of the year the original film version of From Here to Eternity swept the Academy Awards, winning eight Oscars, including Best Picture and Best Director. The 1951 novel from which the film and stage adaptations were taken won the National Book Award and appears on the Modern Library 100 Best Novels List.