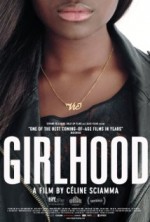 (2014) A French drama about a teenage girl and the gang of girls she falls in with, in the process learning what friendship means and experimenting with identity. Though the gang of girls are “three tough Rizzo-types,” the film is not about “bad girls” corrupting good or about girls in peril, but instead is a “terrific antidote” to those common narratives, said film critic Sheila O’Malley. The director, Céline Sciamma, “is more interested in how girls figure things out than in the many ways girls can go wrong,” O’Malley said.