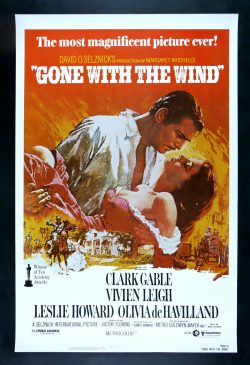 (3 hours 58 min) Frankly, my dear, this is one of the most iconic films of all time. This tale of the Old South from the start of the Civil War through to the period of reconstruction focuses on the tragic romance between the roguish Rhett Butler and Scarlett O’Hara.

Before the start of the war life at the O’Hara plantation, Tara, could only be described as genteel. As for the young Scarlett, she is without doubt the most beautiful girl in the area and is always the belle of the ball. She is very much looking forward to a barbecue at the nearby Wilkes plantation as she will get to see the man she loves, Ashley Wilkes. She is more than a little dismayed when she hears that he is to marry his cousin Melanie Hamilton and in a fit of anger, she decides to marry Melanie’s brother. War is soon declared and as always seems to be the case, men march off to battle thinking that it will only last a few weeks. Now living in Atlanta, Scarlett sees the ravages that war brings. She also becomes re-acquainted with Rhett Butler, whom she had first met at the Wilkes barbecue. Now a widow, she still pines for the married Ashley and dreams of his return. With the war lost however, she returns to Tara and faces the hardship of keeping her family together and Tara from being sold at auction to collect the taxes. She has becomes hardened and bitter and will do anything, including marrying her sister’s beau, to ensure she will never again be poor and hungry. After becoming a widow for the second time, she finally marries the dashing Rhett but they soon find themselves working at cross-purposes, their relationship seemingly doomed from the outset.