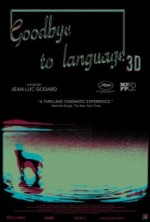 (2014) A French film directed and written by pioneering filmmaker Jean-Luc Godard. Much of “Goodbye” is built around a young couple at a lake house, often arguing and often naked, but it’s essentially a feature-length montage, with prolonged discussions on historical and political topics, said film critic Matt Zoller Seitz.

Godard makes creative use of 3-D and digital video, and the film is “richly expressive in every sort of language (written, spoken, visual),” though what the filmmaker is trying to say may not be clear, Seitz said. “It’s a documentary of a restless mind.”

Lead actress Heloise Godet will be a guest.