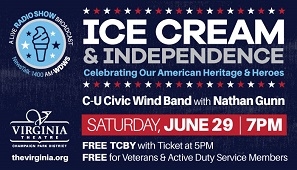 Join your host Brian Barnhart and the WDWS Newstalk-1400 AM team in celebrating Independence Day in style with the very best American music performed by the Champaign-Urbana Civic Wind Band, conducted by Linda Moorhouse and featuring Nathan Gunn, baritone. We’ll be serving delicious TCBY frozen yogurt at 5pm on Park Avenue, right outside the theatre, before the concert. Music begins at 7pm in the Virginia’s auditorium.

Special thanks to WDWS, The News-Gazette, the University of Illinois Bands program, and TCBY.

Dr. Linda R. Moorhouse is beginning her tenth year as a member of the University of Illinois faculty and currently serves as Professor of Music and Associate Director of the School of Music.  She also serves as President of the prestigious American Bandmasters Association, where Albert Austin Harding, the University of Illinois’s first band director, was one of nine founding members.  Dr. Moorhouse is also a past president and the current Executive Secretary of the National Band Association, the world’s largest professional organization for bands.

Nathan Gunn, Professor of Music at the University of Illinois, is widely acclaimed for his diverse performing career bridging the genres of opera, musical theatre, and recital. He has performed many of opera and musical theater’s greatest roles on the world’s most prestigious stages and has also been seen and heard on television, radio, video, and in live simulcast performances, including the first ever Met in HD broadcast (The Magic Flute). He has won both the Grammy Award for Best Opera Recording and the Metropolitan Opera’s first ever Beverly Sills Award. Nathan has frequently collaborated with many stars of musical theater, including Mandy Patinkin, Kelli O’Hara, Audra McDonald, and Kristin Chenoweth.