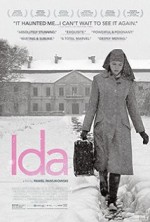 (2013) A black-and-white Polish drama set in 1962, about an 18-year-old orphan and aspiring nun and the journey she takes with her one known relative, a worldly aunt seeking to learn how her Jewish parents died during World War II. Through their journey, revelations come about a dark time when people turned on their friends and neighbors. The film won the 2015 Oscar for best foreign-language film, and critic Godfrey Cheshire calls it “riveting, original and breathtakingly accomplished on every level.”