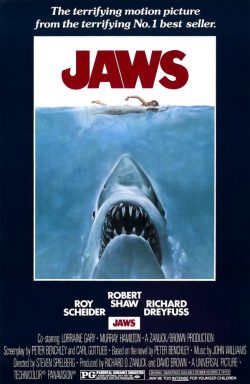 (124 min) A giant great white shark arrives on the shores of a New England beach resort and wreaks havoc with bloody attacks on swimmers, until a local sheriff teams up with a marine biologist and an old seafarer to hunt the monster down.

Now considered one of the greatest films ever made, Jaws was the prototypical summer blockbuster, with its release regarded as a watershed moment in motion picture history. Jaws became the highest-grossing film of all time until the release of Star Wars (1977). It won several awards for its soundtrack and editing. Along with Star Wars, Jaws was pivotal in establishing the modern Hollywood business model, which revolves around high box-office returns from action and adventure pictures with simple “high-concept” premises that are released during the summer in thousands of theaters and supported by heavy advertising.

THE FILMS OF STEVEN SPIELBERG

PLEASE NOTE: Close Encounters of the Third Kind, originally scheduled for June 20 & 22 was not available at this time.  Jaws (1975) is replacing it in this series.