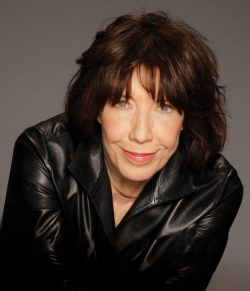 Lily Tomlin rose to national prominence in 1969 on the television series, Laugh-In, with her characterizations of Ernestine, the irascible telephone operator, and Edith Ann, the devilish six-year-old. Tomlin went on to star in six comedy television specials, which she co-wrote with Jane Wagner. In 1985, Ms. Tomlin appeared on Broadway in Wagner’s critically-acclaimed play, The Search for Signs of Intelligent Life in the Universe. On film, Lily’s 1975 debut in Robert Altman’s Nashville was nominated for an Oscar, and the NY Film Critics voted Tomlin Best Supporting Actress.

Over the next forty years, she has starred in over 25 movies, including 9 to 5, All of Me, Tea with Mussolini, A Prairie Home Companion, Admission, and, most recently, the critically-acclaimed Grandma.

On television, Tomlin has been seen in many series, including The West Wing, Desperate Housewives, the FX series Damages, NCIS, and Web Therapy. In 2016, Tomlin filmed the third season of her hit Netflix series with Jane Fonda, Grace and Frankie.Throughout her career,

Presented by the Champaign Park District