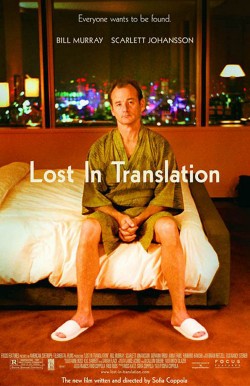 (101 min) After making a striking directorial debut with her screen adaptation of The Virgin Suicides, Sofia Coppola offers a story of love and friendship blooming under unlikely circumstances in this comedy drama. Bob Harris (Bill Murray) is a well-known American actor whose career has gone into a tailspin; needing work, he takes a very large fee to appear in a commercial for Japanese whiskey to be shot in Tokyo. Feeling no small degree of culture shock in Japan, Bob spends most of his non-working hours at his hotel, where he meets Charlotte (Scarlett Johansson) at the bar. Twentysomething Charlotte is married to John (Giovanni Ribisi), a successful photographer who is in Tokyo on an assignment, leaving her to while away her time while he works.