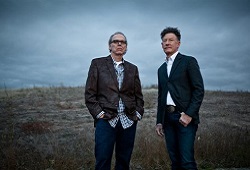 Don’t miss two veteran singer/songwriters on stage together in an intimate acoustic performance.

Lyle Lovett
Singer, composer, and actor Lyle Lovett has broadened the definition of American music in a career that spans 14 albums. Coupled with a gift for storytelling, this Texas-based musician fuses elements of country, swing, jazz, folk, gospel, and blues in a convention-defying style that breaks down walls.

Since his self-titled debut in 1986, Lovett has evolved into one of our most vibrant and iconic performers. Among his many accolades—including four Grammy Awards—Lyle was given the Americana Music Association’s inaugural Trailblazer Award, and was named Texas State Musician. His works, rich and eclectic, are some of the most beloved of any artist working today.

John Hiatt
John Hiatt has always been a keen observer of life’s flings and foibles, and his insights and skill at sharing them have only sharpened over the years. Forty years into his recording career, Hiatt recently released his 22nd studio album, Terms of My Surrender. Along the way, many of his songs reached a wider world of fans via other artists’ versions, like Rosanne Cash’s Pink Bedroom, and most famously Bonnie Raitt’s hit version of Thing Called Love. Alternately bemused and profound, John Hiatt is a self-aware chronicler of both his own and others’ stumbles and epiphanies, the tales richer with each telling.

Presented by the Champaign Park District