MARK GIFFORD, with ‘The King of Kings’ 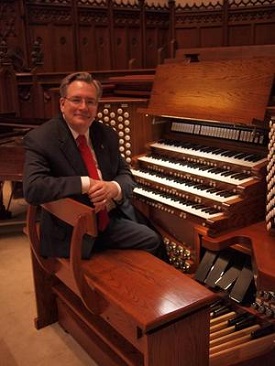 Mr. Gifford will accompany a full-length silent film – Cecile B. DeMille’s 1927 classic, King of Kings – much the same way moviegoers experienced the cinema of the 1920s at the Virginia Theatre!

Mark E. Gifford
Mark E. Gifford is the Associate Pastor of the Parkway Christian Church, Disciples of Christ. He is a member of the American Guild of Organist (Central Illinois Chapter), performer at the AGO Regional Convention (St. Louis, MO, June 2015), and a member of the American Theater Organ Society (St. Louis Chapter). He has a B.A. in Speech Communication from McKendree University and a Masters in Religious Education from Midwestern Baptist Theological Seminary. He was ordained in June, 1978.

Mark has been playing his original organ score to the 1927 silent movie King of Kings since 1989 when he gave five performances at the Kirkwood Cinema, Kirkwood, MO.

King of Kings (1927, 115 minutes long) was the first of Cecil B. DeMille’s great biblical movie epics. The film is the second in DeMille’s biblical trilogy, preceded by The Ten Commandments (1923) and followed by The Sign of the Cross (1932). King of Kings was the first movie that premiered at the noted Grauman’s Chinese Theater in Los Angeles, California (on May 18, 1927).