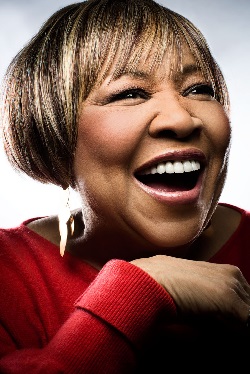 As both a solo vocalist and with her family group, the Staple Singers, Mavis Staples has recorded everything from 1950s delta-gospel—a sound she helped create—and civil rights era protest songs to Number One hits like Respect Yourself and I’ll Take You There. A dedicated collaborator, Ms. Staples has worked with producers from Prince and Ry Cooder to Wilco’s Jeff Tweedy and has performed with dozens of different recording artists, including a legendary spot in the concert film The Last Waltz.

While Mavis Staples has cemented her legacy as one of the most distinctive voices of the past sixty years, appreciation for her contributions to American music continues to grow. She was inducted into the Rock and Roll Hall of Fame in 1999, won a Grammy Lifetime Achievement Award in 2005, was awarded an NEA National Heritage Fellowship Award in 2006, and was listed as one of Rolling Stone magazine’s 100 Greatest Singers of All Time in 2008.  In 2007, Mavis was awarded the Spirit of Americana/Free Speech in Music Award, co-presented by the Americana Music Association and the First Amendment Center.

In 2015, Staples won the second-annual Woody Guthrie Prize, given annually to the artist who best exemplifies the spirit and life’s work of Woody Guthrie by speaking for the less fortunate through music, film or other art forms and serving as a positive force for social change in America.

Ms. Staples’ life has been the subject of a 2014 book (I’ll Take You There: Mavis Staples, the Staple Singers and the March Up Freedom’s Highway, by Greg Kot), and a forthcoming HBO Documentary (Mavis!, set to air on February 29, 2016). In April, 2015, she released a new, critically-acclaimed four-song EP, Your Good Fortune.

On February 19, 2016, Mavis Staples will release Livin’ On A High Note, a new full-length record with songs written specifically for her by performing artists such as Neko Case, Bon Iver, Nick Cave and many others, and one that Rolling Stone magazine included in its list of 45 Most Anticipated Albums of 2016.