MELISSA ETHERIDGE – THIS IS M.E. SOLO 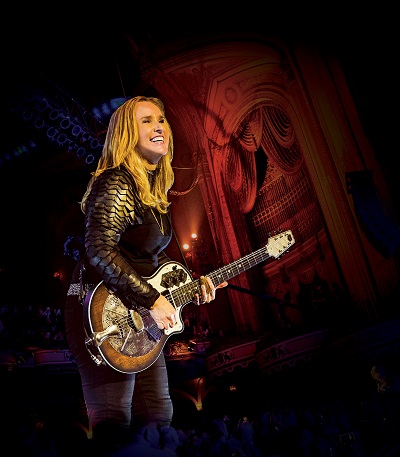 Academy Award-winning and Grammy Award-winning singer-songwriter Melissa Etheridge will perform a solo concert at the historic Virginia Theatre in downtown Champaign on Saturday, April 30, 2016, at 7:30 P.M. Reserved seating tickets ($42.50-$64.50) go on sale Friday, March 18, 2016, at 10:00 A.M., at the Virginia Theatre box office, here at www.thevirginia.org, or charge by phone at 217-356-9063. Presented by the Champaign Park District.

Known for her confessional lyrics and smoky vocals, Melissa Etheridge has remained one of America’s favorite female singer-songwriters for more than two decades. She has recorded five Platinum albums, two Gold albums, eleven Billboard Hot 100 charting singles (with six hitting the Top 40), and eleven Top 40 Billboard Adult Contemporary charting singles. Melissa’s fourth studio effort, Yes I Am, spent 138 weeks on the charts, earning a certification of 6x Platinum. To date, she has received fifteen Grammy Award nominations and has twice won the Grammy Award for Best Female Rock Vocal Performance. In 1996, Ms. Etheridge received the Songwriter of the Year honor at the ASCAP Pop Awards, and, in September 2011, she received a star on the Hollywood Walk of Fame.

Melissa Etheridge joined the American rock scene in 1988 with the release of a critically acclaimed, self-titled debut album, which she followed with a first-time performance on the 1989 Grammy Awards program. In the years following, her popularity grew around memorable Top 40 singles like “Bring Me Some Water”, “No Souvenirs”, and “Ain’t It Heavy”, for which she won her first Grammy Award (1992). The singer found further commercial and artistic success with her fourth album, Yes I Am (1993), a collection featuring the hits “I’m the Only One” and “Come to My Window”—a song that brought Etheridge her second Grammy Award. In 1995, Etheridge issued her highest charting album yet, Your Little Secret, containing the hit single “I Want to Come Over.”

In February 2007, Melissa Etheridge celebrated a career milestone with a victory in the “Best Song” category at the Academy Awards for “I Need to Wake Up,” written for the Al Gore documentary on climate change, An Inconvenient Truth.

She released her latest album, This Is M.E., in September 2014, which features singles “Take My Number”, “A Little Bit of Me”, and “Monster”.