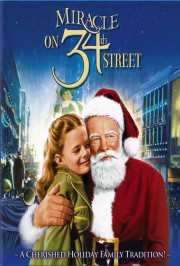 The film won Academy Awards for Best Actor in a Supporting Role (Edmund Gwenn), Best Writing, Original Story (Valentine Davies) and Best Writing, Screenplay. It was also nominated for Best Picture, losing to Gentleman’s Agreement. In 2005, the film was selected for preservation in the National Film Registry by the Library of Congress as being “culturally, historically, or aesthetically significant”. The Academy Film Archive preserved Miracle on 34th Street in 2009.

BEST CHRISTMAS MOVIES EVER
Start a new tradition this year with family and friends at one of these classic holiday tales. Enjoy a cup of hot chocolate on us at each showing!