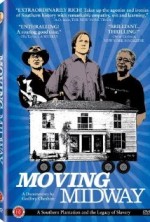 (2007) A documentary about moving an old Southern plantation house, and in the process learning of a family’s secret history and dealing with myths of plantation life.

The director is film critic Godfrey Cheshire, who decided to make a documentary when he learned that his cousin planned to move the house from their family’s ancestral land near Raleigh, North Carolina. He then makes chance connections with the African-American side of the family. It’s a “deceptive film,” Roger Ebert said in his 2008 review. “It starts in one direction and discovers a better one.”

Cheshire will be a guest.