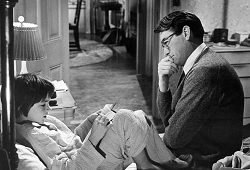 Not Rated (130 min) Adapted from Harper Lee’s Pulitzer Prize-winning novel, To Kill a Mockingbird is considered one of the finest film adaptations of all time. The picture stars Gregory Peck as Atticus Finch and Mary Badham as Scout and marked the film debut of Robert Duvall. It received overwhelmingly positive reviews from critics at its release and was a box-office success, earning more than 10 times its budget and winning three Academy Awards. In 2003, the American Film Institute named Atticus Finch the greatest movie hero of the 20th century.