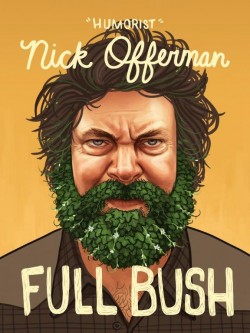 Nick Offerman is an actor, writer, and woodworker, best known for the role of Ron Swanson on NBC’s hit comedy series Parks & Recreation which wrapped its 7th and final season in 2015. For his work on the show, Nick won a Television Critics Association Award for Achievement in Comedy.  Mr. Offerman was recently seen in A Walk in the Woods and Me and Earl and the Dying Girl, and in the second season of the FX series Fargo, for which he received a nomination for a Critics’ Choice TV Award. His long list of film credits also includes 22 Jump Street, We’re The Millers, The LEGO Movie, and Sin City. Television credits include  George Lopez, Deadwood, NYPD Blue, 24, Will & Grace, The West Wing, Gilmore Girls, ER, and more.

Offerman got his start in Chicago’s theater community, where he was a founding member of the Defiant Theatre. Last year, Nick Offerman and wife Megan Mullally debuted Summer of 69: No Apostrophe. Mr. Offerman has previously toured his comedy shows Full Bush and American Ham. In 2013, Offerman released his NYT bestselling book, Paddle Your Own Canoe: One Man’s Fundamentals for Delicious Living. He released his second NYT  bestseller, Gumption: Relighting the Torch of Freedom with America’s Gutsiest Troublemakers, in 2015.

**This is considered a sold out show, but for most shows the artist will put some tickets on hold for the press, VIPs, etc. Sometimes on the day of the show, the artist will release the held tickets so you are welcome to come in or call that day to find out if they have become available!**

WINE AND BEER SERVICE
The Champaign Park District is proud to welcome Farren’s Pub & Eatery to select events at the Virginia Theatre. You’ll find Farren’s set up in the theatre’s lobby, serving fine wines and beers. From Cabernet to  Chardonnay, Sam Adams to Sierra Nevada, the skilled servers from Farren’s always bring the perfect selection to complement your Virginia experience! Offered at most live shows. Both cash and credit cards accepted.