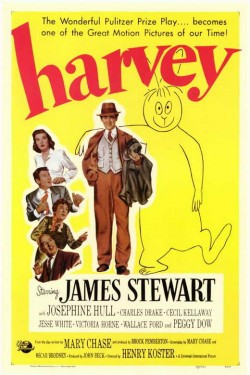 The people have spoken – the Reader’s Choice voting is in!

Elwood P. Dowd (James Stewart) is a wealthy drunk who starts having visions of a giant rabbit named Harvey. Elwood lives with his sister Veta (Josephine Hull) and her daughter (Victoria Horne), and Veta worries that Elwood has gone insane. In the process of trying to have him committed, Veta admits that she occasionally sees Harvey herself. The director of the mental home, Dr. Chumley (Cecil Kellaway), tries to reconcile his duty to help Elwood with his own growing experiences with Harvey.

THE CANDIDATES (and the results):

2016-2017 NEWS-GAZETTE FILM SERIES
Join us one Saturday each month as we screen the most beloved classic films of all time. Virginia Theatre organist David Schroeder performs on the Virginia’s historic Wurlitzer Pipe Organ at most News- Gazette screenings, and film critic Chuck Koplinski leads discussions after all of our evening screenings. NEW this year: before each 7pm News-Gazette film, take a trip back in time with a short sing-a-long with David at the Wurlitzer and our historic glass slides as your guide! The Virginia Theatre houses one of the largest collections in the country of these unique glass slides, each set printed with the lyrics to a classic tune from days gone by. Warm up your pipes and bring the whole family!