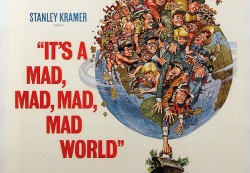 Tickets: $6
Add’l per ticket processing fees apply: $1 (online only)
Film critic, Chuck Koplinski, will not be available to speak on this date.  He will, however,  resume on August 6th for Willy Wonka & The Chocolate Factory (1971)

The people have spoken – the Reader’s Choice voting is in!
The movie with the most votes will be shown at 1pm and 7pm, June 25, 2016, at the Virginia.  And the winner is…

It’s A Mad, Mad, Mad, Mad World (1963)
(3hr 25min)  With this all-star Cinerama epic, producer/director Stanley Kramer vowed to make “the comedy that would end all comedies.” The story begins during a massive traffic jam, caused by reckless driver Smiler Grogan (Jimmy Durante), who, before (literally) kicking the bucket, cryptically tells the assembled drivers that he’s buried a fortune in stolen loot, “under the Big W.” The various motorists setting out on a mad scramble include a dentist (Sid Caesar) and his wife (Edie Adams); a henpecked husband (Milton Berle) accompanied by his mother-in-law (Ethel Merman) and his beatnik brother-in-law (Dick Shawn); a pair of comedy writers (Buddy Hackett and Mickey Rooney); and a variety of assorted nuts including a slow-wit (Jonathan Winters), a wheeler-dealer (Phil Silvers), and a pair of covetous cabdrivers (Peter Falk and Eddie “Rochester” Anderson).

Come 30 mins early to the 1pm screening to enjoy music performed by Virginia Theatre organist David Schroeder before the film!