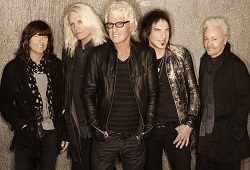 PLEASE NOTE: All tickets from the originally scheduled February 8 REO concert will be honored by the theatre at the rescheduled show November 10th.

Formed loosely in the late ’60s at a well-known college in Champaign, IL, REO  Speedwagon (named after the precursor to the light truck) rode to shows in a station wagon, hopping from small gigs to even tinier gigs, just to get their name out. It worked, as fans quickly realized there was much more going on here than your average college party band.

By the early ’70s, REO’s unrelenting drive, as well as non-stop touring and recording, jump-started the burgeoning rock movement in the Midwest. It carved a path that was eventually followed by STYX, Kansas, Cheap Trick, and more. Platinum albums and freeform FM radio staples such as ‘Ridin’ The Storm Out’ followed, setting the stage for 1980’s explosive Hi Infidelity.

REO rode the top of the charts with an RIAA-certified 22 million albums sold in the U.S. and 40 million around the globe, with a string of gold and platinum records and international hit singles. The band’s younger fans might not realize the sheer impact REO has had on music and the culture of rock ‘n’ roll. Hi Infidelity’s millions in sales were fueled by massive hit singles such as ‘Keep On Loving You’ and ‘Take It On the Run.’  Thirty-plus years later, the nine-times certified platinum Hi Infidelity still remains a high-water mark for rock bands; the album spent 15 weeks in the #1 slot, a feat simply unattainable in music today.

These days REO are still doing what they’ve always done – taking good care of their legacy while keeping the focus on the future. REO’s career will always carry on with music that continues to define excellence in song craftsmanship and brilliant live performance for several generations of fans.

*REO Speedwagon “Take It On The Run” VIP Package