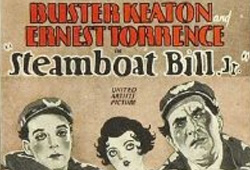 Steamboat Bill JR (70 minutes)
This 1928 feature-length comedy silent film features Buster Keaton and has come to be regarded as a masterpiece of its era. Released by United Artists, the film was the last product of Keaton’s independent production team and set of gag writers.

House organist David Schroeder will be playing our historic Wurlitzer organ before both showings!

Also, News-Gazette’s film critic, Chuck Koplinski, will do a free, post-screening talk after the evening show.