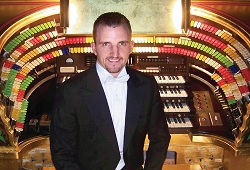 This 1923 romantic comedy includes one of the most famous images ever from the silent film era: Harold Lloyd clutching the hands of a large clock face as he dangles from the outside of a skyscraper above moving traffic. The picture was very successful financially and also critically, and it cemented Lloyd’s status as a major figure in early motion pictures.

Dr. Steven Ball studied at the University of Michigan where he went on to both teach and serve as University Carillonneur and became the Director of the famous Stearns Collection of Musical Instruments. His impressive and varied career includes extensive touring throughout the world as a silent film accompanist, theater organist, and concert organist. He has recently been named Director of Sacred Music at the Oratory of St. Francis de Sales in St Louis, Missouri.