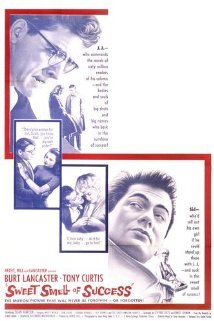 (96 min) Powerful newspaper columnist J.J. Hunsecker (portrayed by Burt Lancaster and based upon famed newspaperman Walter Winchell) uses his connections to ruin his sister’s relationship with a man he deems unworthy of her. The film is commonly listed among the greatest movies of all time for its street-smart dialog and innovative cinematography. Also starring Tony Curtis and co-written by the great Clifford Odets.

Special Additions:
1pm: David Schroeder will be playing the organ before the movie

7pm: News Gazette film critic, Chuck Koplinski, will be giving a talk after the film, upstairs, in the mezzanine lobby. He talks about the film, has slide show visuals, and really digs deep for interesting info about the actors, director, the film and how it relates to what was going on at the time.