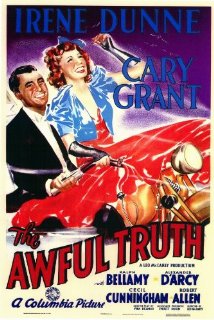 (91 min) A definitive screwball comedy of the thirties, this stylish film is a witty battlefield of marital misadventures, mismatches and snappy dialogue, with slapstick, improvization and hilarious romantic antagonism between its two stars, Cary Grant and Irene Dunne. They appear as a disfunctional couple who file for divorce but then attempt to sabotage and ruin each other’s new romances and are ultimately reconciled ust before the divorce becomes final.