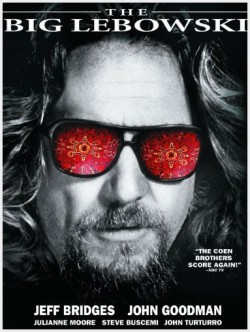 (117 min) The Big Lebowski stars Jeff Bridges as Jeffrey “The Dude” Lebowski, a Los Angeles slacker and avid bowler. He is assaulted as a result of mistaken identity, after which The Dude learns that a millionaire also named Jeffrey Lebowski was the intended victim. The millionaire Lebowski’s trophy wife is kidnapped, and he commissions The Dude to deliver the ransom to secure her release; but the plan goes awry when the Dude’s friend Walter Sobchak (John Goodman) schemes to keep the ransom money.  Also starring; Julianne Moore, Steve Buscemi and John Turturro.