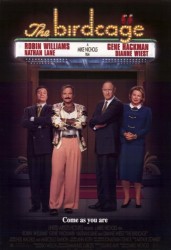 A Tribute to Robin Williams – Join us for five of the most acclaimed films made by one of the greatest comic actors of all time.

The Birdcage (1996)
A gay cabaret owner and his drag queen companion agree to put up a false straight front so that their son can introduce them to his fiancée’s right-wing moralistic parents.  (R) 117 mins