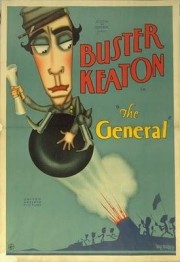 The Champaign Park District will host acclaimed theatre organist Mark Gifford for a special screening of Buster Keaton’s legendary silent film The General (1926) at the historic Virginia Theatre.  Mr. Gifford will accompany the 67 minute-long feature film on the theatre’s fully-restored 750-pipe Wurlitzler Hope Jones pipe organ—with an original score of his own creation.

Mark Gifford
Mark Gifford has been performing on the Barton Theatre Pipe Organ in the Springfield Illinois High School since 1993. It was at that first concert that Mark started what has become a tradition in Springfield: a theatre pipe organ concert full of surprises.

In addition to playing Springfield’s Barton Theatre organ, Mark is one of the organists at the Lincoln Theatre in Belleville, IL, and the FOX Theatre (lobby organ) in St. Louis, MO. He has recorded a Christmas album (on the Lincoln Theatre Pipe Organ) entitled Pipe In a Swingin’ Christmas, which was released in December of 1998.

The General (1926, Silent, B&W)
This feature-length comic masterpiece is considered by critics as one of Buster Keaton’s greatest and was ranked #18 by the American Film Institute in their 2007 list of the 100 Best American Movies of All Time.  Brilliantly filmed and fueled with classic physical comedy, The General captures Keaton at his timeless best.

The film was inspired by William Pittenger’s The Great Locomotive Chase, a true story of an event that occurred during the American Civil War. The film version was co-directed by Buster Keaton and Clyde Bruckman.

Synopsis: Johnnie (Keaton) loves two things: his train and the lovely Annabelle Lee. When the Civil War breaks out he enlists as a soldier, but it is decided that he is too valuable as an engineer. Annabelle thinks it is because he is a coward. When Union spies capture Johnnie with Annabelle on board, Johnnie “The General” must rescue both his loves.

(67 min) This classic silent comedy is considered by critics as one of Buster Keaton’s greatest and was ranked #18 by the American Film Institute in their 2007 list of the 100 Best American Movies of All Time.  As a very special treat, acclaimed theatre organist MARK GIFFORD will accompany the film on the Virginia Theatre’s historic 750-pipe Wurlitzler with an original score of his own creation.