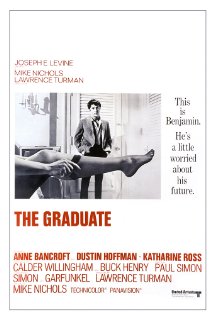 (106 min) A biting satire about a timid college graduate who finds himself adrift in the shifting social and sexual mores of the 1960s. Robert Redford was originally considered for the lead role, but director Mike Nichols nixed the idea because he felt Redford lacked the underdog quality needed for the part. Buck Henry co-wrote the screenplay for the film, which was a smash hit. Starring Anne Bancroft, Dustin Hoffman and Katharine Ross.