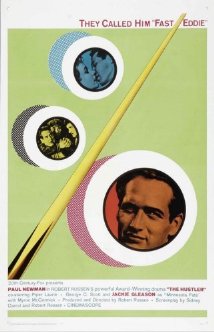 (134 min) As ‘Fast Eddie’ Felson, Paul Newman created the classic antihero, charismatic but fundamentally flawed, and nobody’s role model. A pool player as good as anyone who ever picked up a cue, Eddie can’t just win: he has to force his opponent to acknowledge his superiority. But then he meets Jackie Gleason’s ‘Minnesota Fats’.