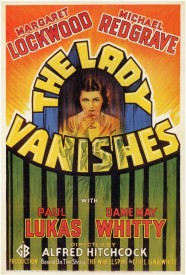 (96 min) One of Hitchcock’s best known and most popular British-made films, it grossed the most of any English film to that date and was named Best Picture of 1938 by the New York Times. While traveling by train in continental Europe, a rich young playgirl realizes that an elderly lady has mysteriously disappeared. Starring Margaret Lockwood and Michael Redgrave.