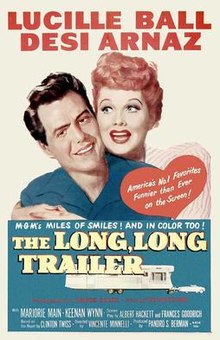 On Sale Date: On Sale Now

Rated G (96 min) When Nicholas Collini (Desi Arnaz) takes a new job as a civil engineer, his new bride Tacy (Lucille Ball) comes up with an idea to buy a trailer to travel around the USA to various work projects on which Nicky is employed, as well as to save money that would otherwise be spent on a house. Tacy also hopes to haul the trailer themselves to Nicky’s new place of work in Colorado, as part of their honeymoon trip to the Sierra Nevada mountains. But the honeymoon trip, as well as the happenings leading up to it, rapidly become a catalog of disasters.

According to Turner Classic Movies’ host, Robert Osborne, the studio was not sure if this film would be a success because it was thought people would not pay money to see Lucille Ball and Desi Arnaz in a movie when they could watch the couple on television for free (I Love Lucy). Arnaz made a $25,000 bet with the studio that the movie would make more money than the current highest grossing comedy at that time (Father of the Bride, starring Spencer Tracy and Elizabeth Taylor, and also directed by Vincente Minnelli). Arnaz won the bet. The film gave audiences an opportunity to see Arnaz and Ball in color when most television sets were black and white.

2017-2018 NEWS-GAZETTE FILM SERIES
Join us one Saturday each month as we screen the most beloved classic films of all time. Virginia Theatre organist David Schroeder performs on the Virginia’s historic Wurlitzer Pipe Organ at most News-Gazette screenings.