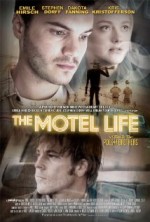 (2012) A drama and thriller about two brothers, played by Emile Hirsch and Stephen Dorff, who are working odd jobs, drinking hard and drifting from motel to motel, when a hit-and-run accident causes them to flee across Nevada. Their lifeline through a stream of bad luck is escapist stories told by one brother and then sketched by the other, and pencil animations of their tales are woven into the film. The mood of the film is “so melancholy-thick that you ache to comfort these men,” said film critic Sheila O’Malley, yet it’s a film with “a very kind heart.”

Director Alan Polsky will be a guest.