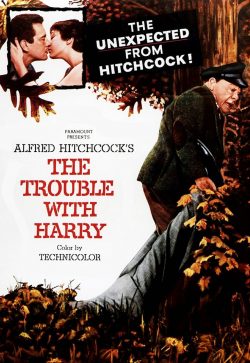 (99 min) In an unusual game of whodunit, passerby have to figure out what really happened to the dead man they found in the woods, and who is responsible. Captain Albert Wiles stumbles across a well-dressed man in a meadow clearing in the hells above a small Vermont town. That man is dead, and Captain Wiles fears he accidentally shot this man, Harry, while he was hunting rabbits. Believing it would be the easiest way to handle the situation, Captain Wiles wants to hide the body rather than tell the authorities. However, while he is in the adjacent forest, he sees other people stumble across Harry, most of whom don’t seem to know him or notice that he’s dead. But one person sees Captain Wiles in the forest, and that person is spinster Ivy Gravely, who vows to keep the Captain’s secret about Harry. But other people who notice Harry become involved: a young, single mother, Jennifer Rogers, who is the one person who does seem to know Harry and seems happy that he’s dead. Then, there’s Sam Marlowe, a struggling artist to whom Captain Wiles tells the entire story of what he has seen thus far. Things quickly become complicated over the course of the day when the group tries to solve the mystery of who actually killed Harry.

Buy the series pass for $24 and get one movie free!